Spicy Savory Vegan French Toast is a filling morning meal with utmost mouthwatering flavors! It’s a complete healthy meal. Along with being high in protein it has a nice blend of simple spices.

So, therefore, if you are looking for a no-sweet breakfast or brunch this Savory French Toast comes in very handy. It is quite regular in my house especially when I am on a no-sugar diet due to health reasons.

Its a very easy recipe and a nice change from traditional French toast. I have added a bit of Indian touch to it and made it a fusion recipe.

Hence, the trick to perfect this vegan French toast recipe to use the the chickpea flour correctly.

This chickpea French toast has become quite regular for us and is a crowd pleaser.

What is chickpea flour?

It is a gluten free flour which is low in calories yet rich in protein and fiber. It is very different form regular flour. This chickpea flour helps in maintaining blood sugar because it is a low GI ingredient and is packed with antioxidants.

What is French Toast?

Traditionally, a slice of bread is soaked into beaten eggs and milk and then pan fried. It is topped with syrup, cinnamon and fruits.

However, vegan versions have evolved to suit other diet types in which chickpea flour batter or silken tofu batter is often used to make vegan French toast.

Here, I have taken this recipe to another level and made it into a vegan savory French toast which is absolutely a delight as a weekend morning meal.

chickpea flour – chickpea flour made from garbanzo beans works best here but besan also makes it quite good and can be used for convenience.

almond flour – this gives a nice nutty flavor and mellows down the strong chickpea flavor.

herbs – I love the idea of herbs in this savory french toast recipe because herbs give these a nice flavor along with with some aroma.

dairy free milk – the batter can be made with water but by adding dairy free milk it becomes a bit thicker and creamier which makes this vegan french toast recipe even tastier.

Vegetables – any vegetables of your choice can be used as topping.

For detailed measurement of ingredients, please scroll down to the printable recipe card at the bottom of this post.

Firstly, I combined all the dry ingredients for the French toast in a mixing bowl. Then, I mixed it well making sure that there are no lumps and all the ingredients blends well into each other.

Secondly, I whisked in water and milk until a thick wet batter is formed. Then, I kept it aside.

Next, I started warming up my skillet on the stove top and greased it with oil.
In the meanwhile, I combined the ingredients of the toppings in a separate mixing bowl and mixed it. Thereafter, I kept it aside.

Once my skillet was warm, I quickly dipped the bread slice into the batter.

Thereafter, I placed it on the skillet.

Afterwards, I topped it with toppings in the skillet itself. Once the bottom of the French toast was cooked, I gently flipped it over to the other side with the help of the spatula.

Subsequently, I pressed it from the center with the spatula towards the skillet to make sure that the toppings are well ingrained in the French toast and does not fall off. Similarly, I followed the same step for the rest of the batter and the bread slices.

Lastly, I served these warm with the side of ketchup or sriracha sauce.

I assure you that once you get the hang of this recipe, you won’t stop at just one.

These tastes best when served immediately. However, you may make ahead the toppings and the batter and refrigerate for a day or two.

Can I bake them?

Yes, absolutely! I have provided the details in the recipe card under notes. This process also makes it completely oil free.

If I am allergic to almond flour then what can I substitute it for?

Is this vegan French toast recipe a healthy breakfast?

I have tried to include protein and omega 3 in the batter in the form of chickpea flour and almond flour. This also makes the batter gluten free. In addition, I have avoided oil/butter in this recipe to save on some calories. This is absolutely a no sugar recipe so we save on the sugar carb as well. Moreover, I have used sprouted grain bread slices that is the healthiest bread with minimum calories. However, the nutritional fact will vary depending on your choice of bread. So, therefore, I can conclude it to be a healthier option than the traditional style French toast recipes.

My other popular savory breakfast recipes are:

This post may contain affiliate links which means that if you click on them and also make a purchase, I will get a small commission. Moreover, I share only those products which I use personally and love.

I hope you enjoy this recipe as much as we did. I am very excited to hear back from you.

Did you make it?
If you get a chance to make this recipe then please leave your feedback in the comments below along with a 5-star rating.

In addition, you may checkout my cookbook for everyday comfort vegan recipes. 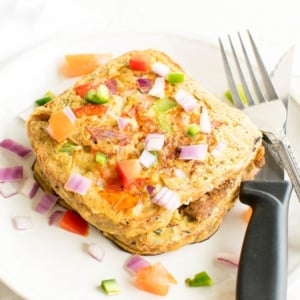