This rich and creamy Cauliflower Tikka Masala is a comforting Indian cuisine! It’s made with simple ingredients and is a healthier form of the traditional dish since its low in fat and carbohydrate.

This concept was originally invented by British Pakistani Chef. In India the version of tikka masala is slightly different. Its less spicy and has a smoother flavor. In India, usually chicken or paneer is simmered in tikka masala. Originally, In India, dry form of tikka using chicken/paneer was made. Later, tikka masala in curry form was added to it in Britain.

Here, I have made a healthier version so that it fits into almost all diet types. By adding cauliflower to this vegan tikka masala its nutritious and low in calories as well.

How to make Cauliflower Tikka Masala

Firstly, I boiled water and seasoned it with salt and turmeric powder. Then, I cooked cauliflower in it and subsequently, I drained it with the help of a strainer/mesh. Then, I kept it aside.

Secondly, I combined onion, tomato paste, ginger, garlic, cashew nuts, cumin seeds in a food processor and ground it absolutely smooth until it became a paste.

Next, I heated oil in a stock pot and spooned out the onion masala into it and sauteed until the masala reduced and dried up a bit.

Thereafter, I added spices and sauteed again for few minutes until it was completely dried.

Afterwards, I poured coconut milk, sugar and salt to it. Then, I lowered the flame and stirred it continuously until the masala was well dissolved in the milk.

Later, I covered and cooked the gravy for sometime at a low flame.

Then, I added cooked cauliflower florets into the gravy and cooked again for few minutes.

Lastly, I garnished it with chopped cilantro and served it with rice, naan and side salad.

We all heartily enjoyed this dish. It’s quite frequent in my house since its comforting, satisfying and wholesome.

How long do they last?
This recipe tastes best when served immediately. However, it can be refrigerated for about a week in an air tight container. The gravy can be frozen for about a month. When ready to use simply defrost it and warm it up making sure that the milk does not cuddle. Then, follow the rest of the steps as per mentioned (for cauliflower).

Can I make it oil free?
You may try it making oil free by sauteing the masala in vegetable broth. However, the consistency and the taste of the sauteed masala might differ a bit as compared to sauteed in oil.

Is this a curry?
Yes!

What can I pair it with?
Since, it’s a curry you may pair it with jeera rice, steamed rice, naan and a side onion salad.

Did you use any food color to bring the red color in it?
No, absolutely not. I cooked this recipe with real and healthy ingredients and the color is all natural. 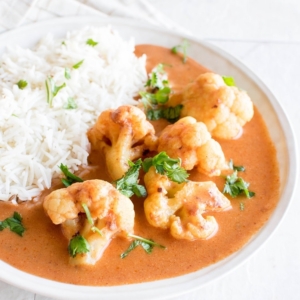