Soups and stews are my favorite work week meals. I like it because it’s a complete meal in one bowl. Takes minimum time and is hassle-free. Most importantly it requires minimum after-dinner clean up. Its perfect for those exhausting days when you just want to put up your feet and yet want some soothing homemade meals.

What is chowder?
Chowder basically is thick chunky stew with lots of vegetables. Originally it was fishermen’s food and was made with mainly seafood. Over the years the recipe of chowder evolved and a variety of them emerged. I came up with its vegan version. It is usually made with a white sauce base. However, I came up with a healthier version and thickened it with chickpea flour which adds protein to it.

Is this similar to potato soup?
You can say that, but chowder is thicker and creamier that a potato soup.

Why I chose Instant Pot for this recipe?
The answer is very simple, it takes less time to cook and more over hardly any baby-sitting is required.

I usually avoid potatoes in my recipe. Simply because it acts as sugar in your body after eating. Moreover, it has too much starch but for this chowder recipe, potatoes played a significant role in making it super desirable. Hence, I loved the idea of potatoes being its main ingredient.

In the first step, I melted vegan butter in the saute mode in instant pot. Then, I added garlic, thyme and chopped onions to it and sauteed.

Next, I added chopped potatoes and mixed very well.

Thereafter, I tossed in the rest of the vegetables and sauteed for 1-2 minutes.

Afterwards, I mixed in some chickpea flour to thicken the soup.

Next, I poured in vegetable broth and closed the lid of the instant pot. Then, I sealed the valve and let it cook on chili/beans mode (default setting).

In the meanwhile, I blended cashew nuts and coconut milk together for cashew cream.
Once done, I released the pressure from the instant pot and opened the lid.
Lastly, I stirred in cashew cream along with the seasonings.
Now, served immediately with chives on top.

Expert Tips:
I used dried chives here for convenience. However, try to use fresh chives as it tastes even better.
When melting vegan butter do not overcook it and do not let it brown. As soon as it starts to melt add the mentioned ingredients.
Its important to keep the ingredients ready so as to avoid over cooking while in saute mode.

If you want to bake your own bread to pair with this soup
Roasted Onion Oatmeal Bread
Garlic Jalapeno Oatmeal Rolls
For salads check these:
Vegan chopped salad with chickpea sour cream dressing
Chickpeas salad in Cilantro Dip

How long this chowder stays good?
This chowder can be refrigerated in an air tight container for about a week. But warm it up thoroughly whenever ready to eat fort he best results.

Can I use a different vessel to make this chowder?
Absolutely YES. You may use a stockpot/saucepan or a Dutch oven to make this. Just simmer it well until done and vegetables are soft (especially potatoes). Turn off the flame and stir in cashew cream along with the seasoning.

If you get a chance to make this recipe then please leave your feedback in the comment section below and also rate this recipe. You may also tag @kiipfit on Instagram and I will definitely shout it out there. 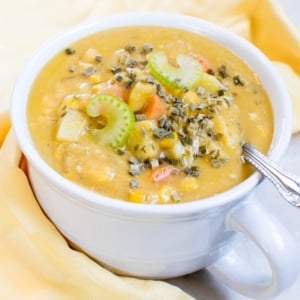