These Greek inspired Vegan Gyros are so delicious, satisfying and yet protein rich. Its baked and made with the combination of tempeh, mushrooms, zucchini, salads and lots of homemade tzatziki sauce.

Since, I discovered this recipe, I have been enjoying it frequently. In fact, almost every weekend I simply place everything in a sheet pan and bake them. It has become our favorite family meal.

Out of excitement and love for these vegan gyros, I decided to click few images and share it with you all. So that, you can also enjoy this family meal with the same smile and laughter as my family.

I agree this recipe has a long list of ingredients but I promise the end result would be worth all the efforts.

How to make Vegan Gyros

Firstly, I boiled some water and cooked sliced tempeh in it for few minutes. Then, I drained it and cooled under the running cold water.

Immediately, I mixed all the marinade ingredients in a mixing bowl and rubbed each tempeh slice in it. Then, I placed them on the prepared sheet pan/baking sheet.

Secondly, in the same mixing bowl I tossed sliced shitake mushrooms and placed them on the second corner of the sheet pan/baking sheet.

Next, in the same mixing bowl, I tossed all the zucchini ingredients and placed them on the last third side of the sheet pan/baking sheet.

Then, I placed the sheet pan in the oven and baked it for 45 minutes at 400-degree Fahrenheit.

Later, I placed it on the flat surface and warmed up a pita bread. Then, I placed the pita bread on a plate and at its center I filled it with tempeh, followed by mushrooms and lastly zucchini.

After this, I drizzled lots of vegan tzatziki over it and stuffed the wrap with lots of salads. Lastly, I rolled it up in a wrap form and served it immediately.

Voila! It simply tasted outstanding. Even though we were full but its taste lingered for a while making us wanting more of these vegan gyros.

Vegan Gyros FAQs
How long does this last?

The baked stuffing can be refrigerated in an air tight container for about 3 weeks. Simply toast them in the toaster oven or re-bake them in the oven before serving.

What kind of tzatziki sauce can I use?

I have linked to my homemade vegan tzatziki below in the ingredients and in the notes for your convenience. It works really well in this recipe.

I have included some oil in the marinade and sprayed cooking spray on the parchment but otherwise I have not used oil very heavily unlike the traditional way. Pita bread is definitely white carb. However, you get whole wheat or whole grain pita breads as well to make this gyro healthier.
Vegan Tzatziki sauce that I used in this recipe is also oil free and low in calories. To make this recipe low carb, simply wrap the stuffing in lettuce and enjoy it as lettuce wrap.
However, overall, this recipe in itself is healthier comparatively and there are alternate ways to make it even healthier.

How does it taste?

It’s a medley of warm spices along with fermented tempeh. The chewy shiitake mushrooms gives it a meaty texture. Zucchini adds the fiber and little extra bite to it. With the addition of salads and tzatziki this gyro tastes like tangy, salty and a balanced flavor of all the spices complimenting the softness of pita bread.

Did you make it?
If you get a chance to make this recipe then please leave your feedback in the comments below along with the ratings. In addition, you may tag @kiipfit on Instagram because we would love to see what you cooked.
Also, if you are looking to explore more delicious recipes of mine then you may check out my cookbooks. 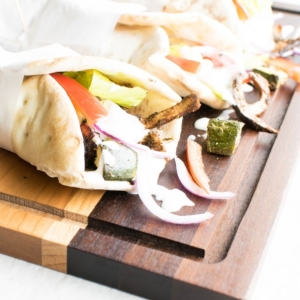