This rich and creamy Roasted Red Pepper Pasta Soup (NO TOMATO) is bursting with flavors! It’s the ultimate comfort meal for all year round. A warm bowl of this soup will satisfy you in any workweek night. This easy and vegan meal-in-a-bowl is made with simple ingredients.

The soup season is finally here. A wholesome family meal is what is needed on the weeknights. When I put together the ingredients of any meal my first preference is to make it kid friendly. Since I deal with a picky eater its an effort to make her try a variety of food. However, she loved this soup and we heartily enjoyed this meal for dinner.

My other popular soup recipes are

How I came up with Pasta in a Soup

We are pasta lovers. Anytime of the day and any day of the week we can just live on it. However, too much of anything is not good for health. So before, I get flooded with health concern questions – I want to clear that I use whole grain pasta to include fiber in our diet. Also, it’s a form of carbohydrate. Therefore, a proportionate amount of pasta in our diet is good.

Which Pasta goes well in the soup

My other favorite Pasta recipes:

In the first step I roasted the whole red bell pepper on the stove. It took about 5 minutes. (The trick is to keep flipping and rotating the pepper so it gets charred from all sides and release its juice). Once done, I turned off the flame and let it cool.

In the meanwhile, I blended cashew cream and kept it aside.
Then, in a saucepan, I melted vegan butter and tossed in garlic clove, oregano and basil.

Immediately I sauteed chopped onion in it until translucent.

Then, I chopped the roasted pepper and tossed in the saucepan. Sauteed it for a minute.

Thereafter, I poured vegetable broth along with water and let it cook for few minutes.
Afterwards, I let it cool for sometime (depending on your blender) and then blended the soup in a blender. Immediately I poured back the soup in the same saucepan again.

Turned on the flame and added the dry pasta. Let it cook uncovered until pasta is al dente (not too soft and not too mushy).
Now, season it with cashew cream, salt and pepper.
Serve immediately to the kids.
Adults add sriracha sauce as the seasoning for an extra punch of spice to it.

If you get a chance to make this recipe then please leave a comment at the bottom of the post and don’t forget to rate this recipe. You may also tag @kiipfit in Instagram and I will definitely shout it out there. I love seeing what’s cooking in your kitchen. 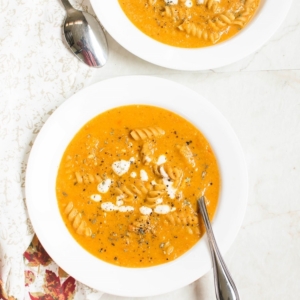 This rich and creamy Roasted Red Pepper Pasta Soup (NO
TOMATO) is bursting with flavors! It’s the ultimate comfort meal for all year
round. A warm bowl of this soup will satisfy you in any workweek night. This
easy and vegan meal-in-a-bowl is made with simple ingredients.